I wanted to write a post about my FIL’s typewriter, the one that he used to send me a letter every week when I was in boarding school and how I felt seeing it on his desk, and how I felt when I carried it out to the dumpster (there is not a large market for 1950’s typewriters, and I could think of nothing useful to do with it, and no sensible reason to keep it, and there were other things to keep, but still, I watched Mr. Spit throw it in the dumpster, and I felt older.)

I’m going to write about toothbrushes instead.

My FIL was born just before the Great Depression, and while he was fairly fortunate because both of his parents worked, he never forgot doing without. When you are a Depression child, you never throw anything out when it still has a bit of use in it. You hold on to things. It’s a maxim – use it up, wear it out, make do, do without. Mr. Spit and I could do better at this maxim.

My SIL and I were cleaning out the master bathroom today, and while that was a wholly unpleasant experience, among the more humorous things found were 12 used toothbrushes, neatly placed in a clear plastic bread bag. As you might imagine, I threw them out, along with the asprin that expired around the time I started high school, a styptic pencil, a hot water bottle so old it broke in half when I tried to open the box and the ugliest sport coat in all creation. (And don’t you tell me the poor could have used that sport coat. It is bad enough being poor, no one is so poor that sport coat would have been anything other than a dizziness inducing abomination. Things that ugly cannot be warm. They are only ugly. They can only be ugly.)

My FIL had ca 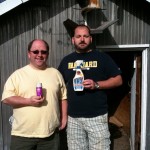 refully saved every thing his son’s ever coloured, all of their art projects, every model airplane they ever built, wood from a million projects, and tins. Lots of small tins. There was a bottle of car cleaner with an endorsement from Mr. T (which, in light of the recent movie, seems strangely current again) and a bottle of ski wax with the french bit incorrectly translated – wax is not “fart” in french. (It’s cire, also, my husband has not ski’d in 30 years).  We have found homes for things, the furniture divided up and given to some university students, a recently married couple. The small household implements and goods will go to the Sally Ann on Thursday, the unopened food to the food bank tomorrow. A few odds and ends to family friends, and what tickles me most, all of those wood ends to a 12, 9 and 8 year old boys, who would like to build a fort in their back yard.

But still, there are a things left over. Things that have meaning, that were saved, carefully for a particular reason, things that were used – made do and not worn out yet. Reminders of a full and long life, of hanging on to things because you might need them, or you might be able to give them to someone who did. Things hedged against a level of want I have never known, hedged against potential use, held on to because they meant something, because there was a bit of use left. I could hear my FIL in my head as I was wantonly binning things that I thought were useless.

He got his own back. About 2 hours after I threw out his toothbrushes, I was cleaning the floor registers. I needed a toothbrush to get into the nooks and crannies. My father in law, the consummate teacher.

This entry was posted in Otto. Bookmark the permalink.