Saturday was a “real” MS day.

I stayed up too late on Friday. I had a skype call with niece the eldest, I was working on something and chatting to a friend in Australia and I looked at my clock and it was way past late. Late enough that it was early again.

I had to be up at quarter to 8 for a breakfast date and I got about 5 hours of sleep.

I had to cancel my dinner plans on Saturday. I managed to get through the day, but mostly I was half asleep. Mostly I wound up sleeping through Saturday, waking up long enough to curse all the stuff that I needed to do, with insufficient energy to actually do any of it. Mostly I gutted through.

On Friday my friend was trying to tell me I’m inspirational. And I’ve never gotten when anyone tells me that. Albert Einstein invented the theory of relativity. Shakespeare wrote some of the most beautiful words in the English language. William Wilberforce fought against slavery in the British Commonwealth for 27 years before it was abolished. Wang Weilin stood in front of PLA Tanks in Tiananmen square to stop an army.

I am a neurotic hot mess.

Tell me things will be as they always were.

Today was the MS Walk. Travis did a brilliant job organizing it. We raised just over $1,200, which is pretty good for 2 months.

It was this moment when I came up to the boys and their shirts, well, I’ll just show you the picture 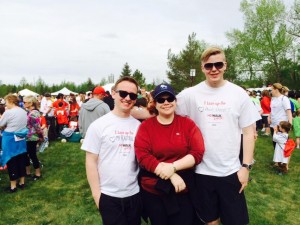 They boys said they were walking for me.

The walk organizers had shirts and bibs that said “I’m walking because I have MS.” I wasn’t ready to wear one.

Oh, hell. I don’t know what I can’t. I can’t stand in public and be any less than perfect. I can’t be anything less than competent.

So, if you want to tell me I’m inspirational, well, I guess I can’t stop you.

But it seems to me that you could do better.

This entry was posted in MS Gets on Your Nerves. Bookmark the permalink.