Four years ago I got a call that my first great nephew was coming, early, rough, skidding into this world. And for a long night I prayed. For days and then weeks pictures would arrive of a red, scrawny, angry looking baby in an incubator. I would show them around, telling people he was the most beautiful great nephew ever, if only in my eyes.

This morning, from Winnipeg, in a sunlight hallway in the Education Building at the University of Manitoba, I called to say happy birthday before my first meeting.

And a not so little voice yelled out at me –

It is hard to believe that this little boy I willed to breathe could share words – words tumbling out and over and around in hisexcitement, his palpable glee spilling from my phone and puddling around my feet as I paced in a hallway.

Time, it passes. We say that, nodding our heads sagely. We talk about how things work out, what is meant to be will be.

Not often enough do things seem to work out in a way that I would call fair and just. In the middle of it, it seems so very long and the world filled with such unfairness.

This morning though, as I watched the sunriseover snow, facing south towards him and I asked what he was going to do today, as I promised him presents and a photo of me in a super hero t-shirt later (Darth Vader, if you were wondering) I realized.

There are “And then” moments.

Moments where we think about what happened 4 years ago and we close our eyes and melt into what is now, and we realize – time it passes. 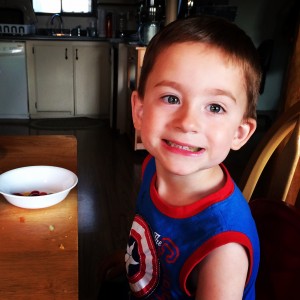 And it is glorious. He is here and whole and healthy and filled with joy.

What was meant to be, became.

This entry was posted in the nieces and nephews. Bookmark the permalink.

2 Responses to And Then