What’s Worse Than a Joe Job?

Generally speaking, when you are planing a remodel job repair job, you budget your materials, plus about 10% for waste, things you hadn’t expected. When you own an older home, you plan for about 20%. When you own the house that Joe fixed up and flipped, oh, you budget at least 50%. A times like today, 200% would have been a safe-ish budget. 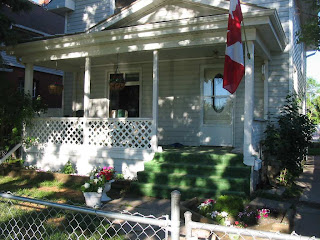 This is what we started with, 5 years ago. It’s actually not too bad. There were other, much bigger issues to deal with. But, finally, the outdoor carpet, in addition to being the ugliest thing you have ever seen, was falling apart, the lattice type rails were so far from meeting code they were going to meet it on the backside, and while you can’t see it, over to the right, just at the top of the stairs, there was this squishy/wobbly/move a bit disconcertingly when you stepped on it part. Which we solved by putting a planter there, but you have to admit, when you have squishy/wobbly/moving floors, maybe putting extra weight there is not going to be a long term solution.

Time for another remodel repair job at Chez Spit. 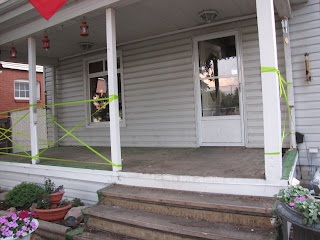 All good remodel repair jobs start with the judicious use of a crow bar. Also, enough dirt to start a whole new farm. I know where all of Alberta’s dirt blew during the dirty thirties – right onto my front porch! And yes, with the stunning bit of carpet removed, we get our first bit of news – those stairs can’t be stained, they have to be replaced.

And the next revelation, that wasn’t plywood under that carpet, that was tongue in groove planking, covered by roofing tar, plastic matting and some flyers. No really, there were flyers glued to the floor, where it was uneven. Moving on to plan B, which is to rip up the existing floor boards, and replace with deck planking. (Plan A had been to cover with that textured stone effects paint.)

No Cha-Ching as the cost is the same, and laying planking will actually be faster. That’s a bonus for the Spits! 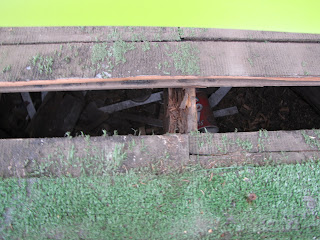 Cha-Ching! $150 more in wood for this rotten floor joist, plus the other 3 we are going to find later on. Also, lose 3 hours pulling out the old ones, and putting in the new ones. Add an extra $20 for new fasteners. 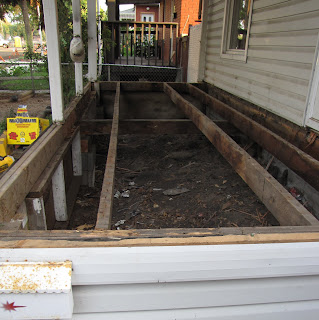 A nice view of the deck, with 80% of the garbage we found hidden under it gone.

Cha-Ching! – $15 for contractor grade heavy garbage bags to haul the wood lathe from something out from under the deck.

Know what would be really cool? If we pulled off the ugly vinyl siding on the bottom and sides of the deck, and used cedar shingles, which we could stain grey to match the railing and the deck planking, right hon? Dream-Cha-Ching! – $75 and 2 hours locating them.

Keeping-Up-With-Reno’s Cha Ching! – $90 for a new mailbox. Cause we can’t put that piece of work back on, now can we?

So there you have it, original budget of about $300, now at least twice that.

****
NB: This is a REPAIR job. A REMODELING job would require us to go to the City, submit our plans, get a permit, and fix some of the problems that exist (all I’m going to say is this: it has stood for almost a hundred years that way, I’d say the method is working, even if it doesn’t meet code). At the end, we would have to pass an inspection. Old houses don’t pass inspections.

This entry was posted in Home Reno's Aren't for Weaklings. Bookmark the permalink.

11 Responses to What’s Worse Than a Joe Job?