The Confidence of a Mediocre White Man

On Wednesday I was drinking scotch in the middle of the afternoon.

(Thank beneficent deities I have the sort of career where this is ok. Thank the Scots for making the good stuff and thank the Irish for bottling the mostly ok stuff we were drinking on Wednesday)

Gratitude aside, I arsed up on Wednesday. Sort of. I keep going back to it, trying to figure out how it happened. I was asked a question in the middle of a presentation and somehow the question threw me. It was:

What I should have done is take a few moments and stop and think. Instead for some reason, I absolutely panicked. Was the data wrong? Was everything I was saying wrong? Was I am incompetent idiot batting above her paygrade? Was this the moment when everyone found out that all I should have ever been allowed to do was sweep the floors and make coffee and I have been fooling everyone for all these years.

Post a few ounces of Irish scotch, I headed into another meeting where I was capable and confident and I have heard nothing from anyone about my arse up. Indeed, they are handing me another pile of work.

I was having lunch with Kuri and she told me about this moment, this tshirt she bought. 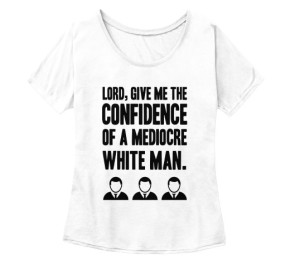 It’s Sarah Hagi’s quote and they made, briefly, tshirts.

Which I want. Because that’s my new litmus test.

This entry was posted in Feminism, Flying with Warthog Air. Bookmark the permalink.

5 Responses to The Confidence of a Mediocre White Man