I almost took another job a few weeks ago. It was more money, a kind of interesting challenge and the sort of thing I’d be really good at. I turned them down. It was the right job for a woman who doesn’t live here any more.

2014 was terrible. A year the likes of which I never want to see again; it brought me to my knees – MS, work changes, family tragedy, my mother’s death – left me unable to breathe.

You know that I went to Paris and London in October of 2014, but you don’t know why. You don’t know about the conversation in the Maple Leaf Lounge – the one where the Handsome Australian asked if I had made up my mind.

I went to Paris and London to try and figure out if I was going to stay married. In 2014, in the midst of all the other problems, my marriage was indisputably broken.

I had both realities all planned. I just didn’t know which one I wanted. I didn’t really choose to be honest. Somewhere over Greenland I decided that I had fallen in love with Mr. Spit once, 14 years ago, and I wanted to see if I could do it again –  I felt I owed him that.

If you were at our Vow Renewal last September, you heard us say in a very real sense we got divorced in October of 2014. We got divorced and decided to get remarried, only under different, better, more realistic terms. We went through our assumptions and our agreements and our beliefs about what marriage was and what it wasn’t.

We finished our vow renewal by promising to trust in our growth, our ability to change and discover new adventures together.

The job looked like an adventure, and I suppose it would have been. It was also running through the motions. What I’ve built here, what I’m building, it’s harder. More confusing. 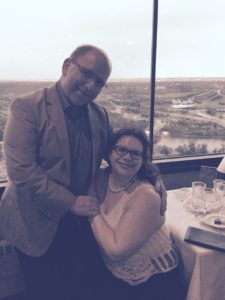 This entry was posted in Marriage, Mr. Spit. Bookmark the permalink.

2 Responses to I wanna go home