His Name is Gabriel 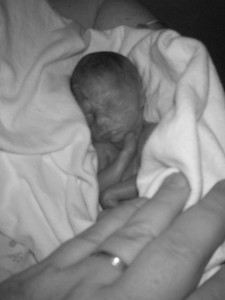 saying his name. I like talking about him. I like it when people acknowledge him. And it hurts me when you look away when I talk about him or his birth. It wounds me when you pretend I wasn’t pregnant. When you pretend he didn’t die. When you expect me to be ok. I know my memories and stories are tinged with tragedy, but they are the only stories I have. It hurts me when you don’t mention that time in my life. When you talk about no babies being born at work in 18 months, I feel a million knives in my heart.

We named him Gabriel for one of two named angels in the Bible. We wanted him to have an angel name when we found out he was going to be an Angel baby. The Anton was for his great grandfather, whom he never met on earth, but was surely there for his arrival in heaven.

His name is Gabriel, and I know that you didn’t know him. But for 26 weeks exactly, we were constant companions. He made me sick, but he brought us such joy. He taught us to have hope for the future. He taught us about taking advantage of the moment. In those rare times when I felt well, I took real joy in eating, for the first time in my life. He taught us to take each day as it comes.

I felt him move in me. I felt him kick and stretch and grow. I talked to him constantly. Told him how thankful I was. Introduced him to things. Told him how much we were looking forward to meeting him. We gave him a name – we called him the bun.

We developed a relationship. He would move and kick when Mr. Spit spoke to him. He liked Robert Munch stories and warm baths and when I ate. His Midwife knew his heart beat. I knew when he slept, until about noon. But he was very active in the afternoon. He didn’t like being poked to wake up, he would stretch and protest and fall back asleep. He didn’t like the doppler or the non stress tests, he would move away. We waved at him during ultrasounds. We told him to hang in there, that he should keep growing. 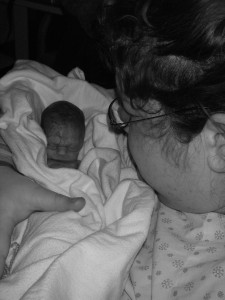 We know you never met him, but for a glorious 30 minutes we did. We marvelled at his perfection. He had such incredible fingers and toes. And so much hair. We knew that he got his long fingers from his Dad, and all his hair from me. He had the crooked ring finger that everyone in my family has. He didn’t open his eyes, but we saw into his soul. 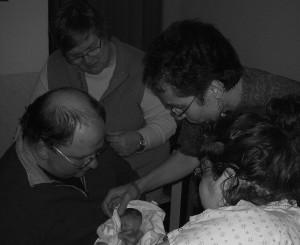 There are a lot of children in our family, in our community, in our workplace, in our church. There are those that are with us, and there is Gabriel. Who is not in sight, but he is the whole of our heart’s. As you talk about children being born, about mother’s day and father’s day and having babies, would you remember, Mr. Spit and I, we are parents. We had a baby boy, and he is still very much alive in our memory. And his name is Gabriel.

32 Responses to About Gabriel